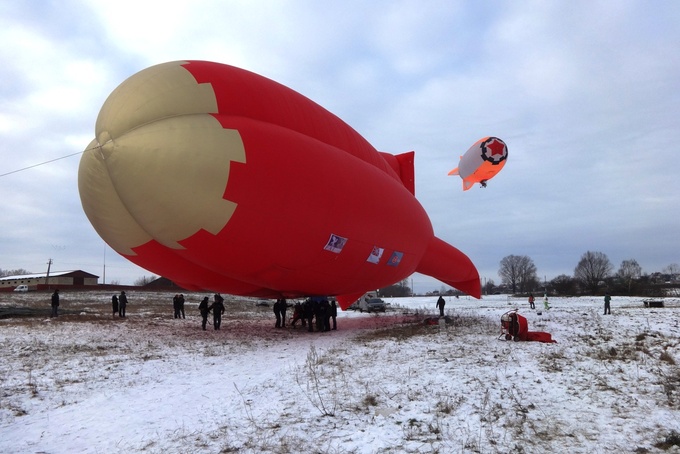 On the 15th December 2013 a completely new type of airship made its maiden flight. The envelope was a combination of hot air and helium and the new FAI catagory is BM – Rosier Airship.

The idea behind this project was born in Moscow by Kubicek‘s long-time partner company Russian Aeronautical Association, under the leadership of Kubicek‘s Russian general sales representative Stanislav Fedorov with generous help from Kubicek’s local sales representative Sergej Skalko and a friend Alexej Jegorov. Kubicek Balloons supported the project by building the ship’s envelope and the gondola’s powerful Ignis burner.
And how does such a system work?
The body of the airship consists of two parts. An outer hot-air layer, and two inner “cigar-shaped” Helium balloons (the gives the airship its unusual shape). The envelope has a volume of 3,160 m3 divided into: 2 560 m3 of hot air and 600 600 m3 of Helium in two cells. The helium cells are removable so that the system can also be flown as a conventional hot-air airship.

These are some of the advantages of this new airship:

The present World distance record for hot air airships, held by Nikolaj Galkin, is 105 km. The team will be focusing on establishing a World distance record for BM airships of between 300 and 400 km! They also intend setting a World endurance record 3 or 4 times as great as the present hot air airship record.
This new kind of airship is designed to work for a living; offering advertising and passenger oportunities at much lower cost than conventional helium airships.
They say that an aircraft that looks good flies well. This airship looks brilliant, doesn’t it? It is expected that its quality will be proved in upcoming flights.

Attention!: We are looking for a new name for this airship. It is a tradition in Russia to name airships - just as naval ships were named - after bird species. What are your suggestions? Please send your suggestions. 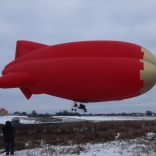 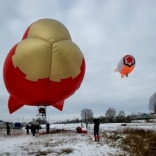 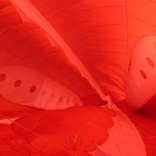 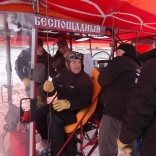 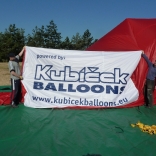